If I can hold onto it long enough to articulate a cohesive thought, well...it's rather a miracle these days. I don't know if this is a common ailment of sixty-somethings or just something that accompanies living in a hillside bungalow above the Pacific with my female companion, my canine companion, two computers, a bunch of guitars, basses and recording gear, a lonely easel, a stack of half completed canvasses, a new novel on the market, three in the incubator and a healthy supply of Hornitos Reposado.

This rather disparate and random collection of projects (I include human and canine relationships on that list, since they are projects in and of themselves) is exacerbated by a large gap between the current and envisioned state of our immediate physical surroundings. The sizable creekside yard looks like an exploded mine field, now punctuated with a beehive in the center. I can't look at it without seeing an immense, complicated, laborious and expensive project – a beautiful, wild landscape with an artist's studio below, rock walls, secret pathways, hidden pools with nubile water nymphs basking on the giant leaves of Chilean gunnera. 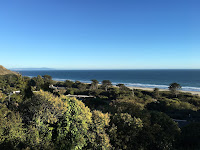 Meanwhile, the inside of the bungalow whimpers with strident longing for a remodel. At the very least, the master toilet, which doubles as a guest 1/2 bath and is less than 15 feet from the living room sofa, must be relocated to a more private corner. It is particularly embarrassing when guests inquire about the state of the toilet user's bowel movements after a loud, fecund blast rattles the pictures on the wall.

Add to all that the presence of the most embarrassing, reprehensible, disturbing public figure in the brief history of our experimental nation on the front page, top slot, pole position of every possible media outlet in the Western world, save perhaps, "Cat Fancy" and "Applied Mathematics Monthly." It's like waking up to a bowl of steamed dog turds for breakfast, day in, day out.

Is it any wonder I can't sleep for more than 3 hours at a stretch? Is it any wonder that BPH reminds me every few hours that the rocks outside the back door need watering? At 11:30 PM, 1:30, 2:45, and 4:30. When Boo wakes me up at 6:30 for his breakfast, I feel more exhausted than I did when I first climbed into the sack the night before. 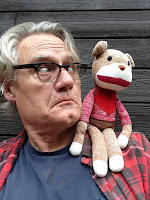 So is it any wonder that I'll assume my position at my desk for another work day, and be snoring with my chin on my chest by 9AM. Not to say I'm not eternally grateful, especially for having learned how to practice TM 45 years ago.  I am so grateful for all the blessings heaped upon my undeserving ass that to even think of complaining about anything  – even the precarious condition of our so-called democracy – seems an abomination, an insult, to the relative peace and tranquility of our lives.

Perhaps you are familiar with this state of affairs? Perhaps not? I, for one, would like to know.

Then there are those Sunday mornings where we awaken, before we collect the morning paper,  and look out upon the world:

There is the forest
There is the sea
Over there, the forest
Out there the sea
Timelessly old
Today, ever new
But I would say nothing of it
If not for you


So is it any wonder, really, that the days of sitting down and banging out 1000 words an hour seem

Posted by Jeb Harrison at 8:12 PM No comments: