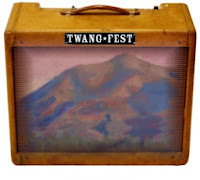 Beginning next year, I will become a 32 year-old single woman of uncertain ethnicities living in Brooklyn with a calico cat named Cattywumpus and two fulvous canaries named Yellow and Yellower. In my Crown Heights apartment with the bird cage hanging from the ceiling on a macrame rope by the bay window I will write stories about my inability to have a meaningful, sustainable relationship with a man or a woman because of my suffocating, shallow, trifling and often drunk mother, who insists that the Rose of Jericho tattoo around my belly button is offensive and unflattering. Using my formidable and exalted abilities to craft riveting and detailed narratives about my slightly overweight body, my anxiety-ridden brain, my oily complexion and oilier hair, and the cavalcade of lovers that come in and out of my life like spectral kangaroos, while employing my celebrated powers of detailed observation, I will become the favorite of literary critics the world over, almost indistinguishable from at least a dozen or so identical writers living in Brooklyn with a cat named Cattywumpus and two fulvous canaries named Yellow and Yellower.

Later that same year I'll fall in love with a tall, graceful Masai warrior after spying him sunning his dusty tallywhacker on the Serengeti plain, where I have gone into hiding after a much publicized affair with the married female director of the Bennington MFA program. My love for the wondrous Masai warrior, his stupendous spear and unintelligible language will backfire when I am accused of cultural misappropriation in my imagined flash fiction stories of sex with lions, hyenas, elephants, rhinos, baboons, orangutans, gorillas, warthogs and wildebeests. Tail between my bruised and battered thighs, I return to Brooklyn as a nobody, a nothing, a has-been wannabe, along with at least a dozen or so identical writers that have ventured to the Serengeti seeking the spiritual equivalent of the storied spear of the tall, graceful Masai.

And so, reluctantly, I return to Coon Hollow, a much wiser but still completely irrelevant and aching 60-year-old man with a beautiful, caring, warm, and understanding wife of 33 years, and two amazingly talented, beautiful and inspiring adult children, and Mr. Boo, a  4-legged ball warrior with a coat of pure velvet cacao, all of whom wait patiently for my next new start. 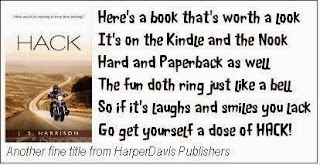 Grab it! It's not about a 32-year old woman, or about a graceful Masai sunning his dusty tallywhacker, but it's just as stupid!

Posted by Jeb Harrison at 7:19 PM No comments: 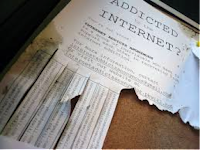 There was a time not long ago when we assumed that someone who was labeled an “addict” was, by default, a drug abuser. If the addict’s drug of choice was alcohol, we labeled them “alcoholics.” But lately, a whole new class of behaviors are getting classified as “addictions,” and, though they have nothing to do with drug and/or alcohol abuse–indeed, they might be things you think are harmless–they are in fact serious conditions which may require professional help.

The definition of “addiction” has always been somewhat of a moving target. Today, the dictionary tells us that an addiction is “the fact or condition of being addicted to a particular substance, thing, or activity: he committed the theft to finance his drug addiction | an addiction to gambling.”

Physical addictions to drugs and alcohol have always seemed relatively clear-cut: the body becomes dependent and goes into withdrawal (fatigue, DTs, stomach upset etc.) without the substance. Psychological addictions, which are usually precursors to physical addictions when substances are involved, include a much broader range of behaviors from sex to gambling to texting.  When such behaviors become so all-consuming that they result in a physical, mental, and/or social withdrawal from “normal” life, they’re considered addictions.

Enter the digital age of on-demand. Now that smart devices have proliferated in developed countries to the point where they’re unavoidable, new behaviors are surfacing that show all the signs of classic addictions. That is, the new behaviors trigger the same rush of dopamine to the brain as drugs and alcohol. That’s not to say that everybody you see walking, or driving, around with their faces buried in their smartphones are riding a dopamine curiosity high.  But if you see someone having a breakdown because they’ve been separated from their device (a not uncommon sight), you might be witnessing real withdrawal symptoms. "When you start seeing that people have to text when they're driving, even though they clearly know that they're endangering their lives and the lives of others, we really have to ask what is so compelling about this new medium?" says Peter DeLisi, academic dean of the information technology leadership program at Santa Clara University.

Of course, when we talk about smartphone addictions, we’re not talking about the device itself but the experience the device enables. The same could be said for PCs. Email, for example, can be like playing slot machines. We’re waiting to hit the jackpot. Not necessarily a monetary jackpot, but delivery of some variation of satisfying information (aka “variable ratio reinforcement”). When our desktop or mobile device buzzes, beeps, or plays the 1812 Overture, we’re about as powerful as Pavlov’s dog. That is, the sound triggers the dopamine curiosity loop, and, even if the actual reward may be infrequent, all it takes is one hit to hook us.

While email and texting (while not driving) addictions can seriously disrupt lives, they are perhaps not as ruinous as other addictions fueled by the Internet and the “always-on” digital culture. The online gaming industry, fueled in part “pathological” gamblers, generated almost $40 billion in revenue in 2014. One of the more disturbing stats indicates that 4% of teens have developed gambling problems as a result.

Addictions to cybersex are rampant. For many, cybersex addictions have resulted in job loss, divorce and a complete inability to have a “normal” relationship. According to Wisdomforliving.com, 60 percent of all visits on the Internet are sex-related, making it the number one topic researched online – that’s almost 40 million people. Of those 40 million internet users, 8-10% of males and 3% of female Internet users are hooked on cybersex.

eBay is also in the category of internet-related addictions because of the excitement (and dopamine) associated with bidding and winning. Online shopping in general can become addicting, even without the thrill of the auction. Shopping 24-7 in the comfort of one’s home, without the aching feet and the pressure of salespeople, makes it that much easier to buy unneeded and unwanted stuff, just for the reward of purchasing something. As a result, online shopping addicts can get into serious financial straits by the time a problem is recognized.

Fortunately, the support community has kept pace with the explosion of new internet-related addictions. Some traditional drug and alcohol abuse treatment organizations are expanding their capabilities and applying some of the tried and true methods to the psychological, behavioral addictions of Internet junkies. While such addictions may seem less severe than addictions to drugs or alcohol, recovery can be just as difficult.  If you have an acquaintance, friend or loved-one who appears to be struggling with one or several of the new, digital addictions, there are many online resources that can help diagnose and treat the problem. Keep in mind that, while such behaviors may appear trivial to unaffected onloookers, they are serious problems and should be treated as such.

Hardback only a couple bucks
Posted by Jeb Harrison at 12:27 PM No comments: 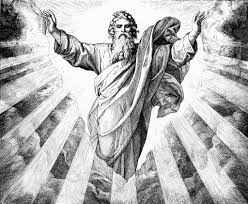 When I walked out onto my patio this evening at the behest of Mr. Boo for a little after-dinner ball, I swept my arm across the forest twilight and the glassy, violet ocean and said "Mr. Boo, this is no accident. This is the work of God." I just can't imagine how such magnificence, such peaceful, serene beauty could be anything else but a gift from the creator and I would have sung allelujah from the mountaintops had not Mr. Boo dropped a muddy tennis ball in my lap.
Writing or even talking about God can be tricky for those that aren't literal subscribers to the Bible. Subscribers will refer to God with male pronouns: "Him", "He", "His", since it's spelled out that out that God made man in his own image, then woman was fashioned out of Adam's rib. So God, as the story goes, must be male just like his nemesis, Satan.
There is a reactionary camp that insists that God is a female, but since that's not the accepted  Biblical story, the idea that the creator is a mother (certainly more believable than a male creator) has not gained much traction. Satan, in this model, is man incarnate.
Then there's the remote yet logical possibility that God is neither male or female, or has anything resembling human characteristics whatsoever. God is the force responsible for the existence of love and the creation of everything good, and not much else. Satan is simply what happens when God's force is drowned out by the noise of human greed.
So what is the pronoun one uses when referring to this force, greater than anything any human can comprehend, with a love so pervasive, free and eternally available that the average Joe is apt to hide under the sofa in it's presence. In the absence of the Biblical structure, how does the believer correctly refer to God when "him", "her", and "it" won't do?
I guess if I had the answer I wouldn't be asking the question. Even the chronic wiseass, he who might dismiss death itself with a wave of the hand, a flippant comment, a clever aside, a quote from Mr. Boo and other wiseguys that would only incriminate him - even such dorks would, at the end of the day, like to get the grammar right.
So, which is it?

Cheap, on Amazon
Posted by Jeb Harrison at 2:15 PM No comments: