Just to whet your appetite a little bit. Don't want anybody gettin' lathered up here but some minor heart palpitations might be appropriate :)


“Perception is more important than reality” is one of the oldest unspoken governing truths of Hollywood. In HACK, Jeb Harrison reveals how this rule also applies to the art world, and its painters, agents, and collectors, with comic and bittersweet results.  Struggling painter Henry “Hack” Griffin’s brief reunion with his long time unrequited love, Hadley Scofield  – and with a complex, charmingly off-beat character like Hadley, the reality is always far more complex – sets in motion a series of ever-escalating ruses that eventually exposes how all the characters in the novel are unable to perceive what is real from that which they so strongly want to be real.  Harrison creates a topsy-turvy carousel of disguises, mistaken identities, lies, half-truths, misunderstood motivations, and perhaps even a fable (in the form of a quasi-mythic homeless man) then sets it spinning until it ensnares all of the characters who inhabit the Bay Area’s “see-or-be-art-scene” – from bisexual ex-wives and Marin County divorcees to gay Scottish make-up artists and a rich music video producer and his ex-WWF bodyguard. Harrison gives each of these characters enough credibility to convey that he’s obviously met and known their real counterparts in his life, and an equal amount of hyperbole that makes them both funny and sad, often at the same time.  Reading HACK is like a weekend getaway in Marin County: a very enjoyable way to spend your time.
- Stan Chervin, screenwriter of Moneyball
“Jeb’s writing is not unlike his signature sound on the bass guitar; under the melodic surface is a rhythmic, soulful groove, with enough space for the almost improvised narrative to breathe and ultimately tell itself with simplicity, energy and Jeb's trademark twisted humor. Jeb also writes like he paints, creating beautiful pictures that  have their own subtle spirit and direction. Jeb writes a quintessentially male story here, but inserts a couple of strong, independent, intelligent  female characters into his  protagonist's life to keep him honest and, of course, ultimately save his sorry a**.  Jeb's creativity seeps into everything he does, but this may be a pinnacle; he is one heck of a story teller. Read it!” - Bonnie Hayes, award-winner singer/songwriter, producer and performer.
"I applaud Hack not only because it is riveting and brilliantly written, but because the male author has created two believable female leads who are the ultimate voice of reason, and can lead the bumbling Hack out his life-threatening pickle. I have to say I savored every minute of it!" ~ Patricia V. Davis, bestselling author of "Harlot's Sauce" and "The Diva Doctrine."
Are we all getting excited about Jeb's novel yet? 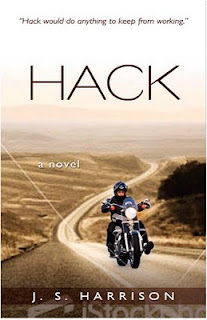