Santa Who? Bring on Baby Jezisek!

What man with the bag? He's totally persona non grata around here. Instead it's the Baby Jesus that has the gift-giving honors in the Czech Republic, and I suspect throughout the Slavic Catholic scene. The little fella lives up in the mountain town of Bozi Dar, where their is a post office that processes all the requests. The kids are expected to send Baby Jezisek a list, then, on Christmas Eve during the height of the celebration, the children are gathered up and sent into another room while Baby Jesus sits down with the parents, has a Piva (beer) and a carp sandwich, and they set up the gifts. The Holy Anklebiter then takes off on his little Baby Jezisek mobile, and the kids are invited back in to open gifts. Not a hint of any fat guys in red suits with white beards in sight, though early in December the Czech's usher in Christmas with a St. Nicholas celebration. There's not a trace of jolly old St. Nick now. Imagine. No "Santa Claus Is Coming To Town", no two column lists headed "naughty/nice", no belly that wiggles like a bowlful of jelly or stockings hung by the chimney with care or wondering how Santa gets his fat ass down the chimney to begin with. No sleighs - no on Dasher on Dancer on Comet and Blitzen and certainly no red-nosed one has the same name as a great Bohemian king. There is no discussion of elves, Mrs. Claus or the North Pole. As such all sorts of potential psychological damage is avoided, though I'm not convinced that a beer guzzling Baby Jezisek, while perhaps a more logical candidate for Christmas gift-bearer than the jolly old elf, would necessarily eliminate some bizarre Christmas fantasies. Then again it's nice to keep the gift giving subplot consistent with the Nativity so when you're cruising around town here just before Christmas the you kinda get the feeling that they're really not celebrating Christmas but instead are celebrating the Christ's birthday. I

The Bohemian "Santa-Free" Christmas does have it's repurcussions across the global economy, of course. I heard that BMG Music, the massive publisher, attempted to sue the Czech Republic for not including all the Santa-oriented songs on the radio during the season. The Czech's responded with one of their periodic "defenestrations" by throwing the lawyers for BMG out the 4th floor window of the Prague Castle.

Not that the event isn't commercial. Ha! NFW it's totally over the top commercial, at least on the streets if the city. Of course I can' speak for TV, radio, newspaper or the web, but even without Santa, Christmas has permeated every move we've made on this trip. From the gitgo our cab driver from the airport explained that the traffic was bumper to bumper because everybody is out shopping and living it up before the big day, which actually isn't a day..., as in Dec. 25, rather Christmas is celebrated the night before on the 24th with a big fat carp. Mmm Mmm Mmm! Just today as Pie, Holly and I were roaming Mala Strana and there on the sidewalk are the Christmas carpmongers with their huges buckets of live carp. Some folks will buy the carp and keep it in their bath tub so it's still wiggling when they throw it in the fryer. Others get it cleaned, scaled and prepared (not filleted) right there in the little fishmonger booth such that the whole fish can sit there in the middle of the Xmas table. Throw in a little cold potato salad with cubed ham and rub a dub dub bring on the grub!

Thanks, but we'll be having Indian takeout, though I imagine the carp is yummy it just doesn't tickle my tummy, but nobody has invited us to dinner and the town is closed tight on Christmas Eve. But don't let the carping give you the idea that all Czech food sucks, though I have yet to have anything to prove otherwise. But being from Northern California basically cripples you when you step out into the world of more meat and potatoes diets. I ate a third of a pork steak, potatoes and grilled vegies and woke up the next day with potatoes coming out my nose. ugh.

Christmas is happening now in this former seat of the Holy Roman Empire, but it's still Christmas Eve for us. The presents are stacked under the last minute tree with its department store ornies, Vince is bangin' out Linus and Lucy on the iPad and all the ghosts of bishops, knights, kings, princes, princesses will be leaving their centuries-old statues on the Charles Bridge and flying around these ancient cobblestone streets through the medieval, gothic and renaissance buildings singing about their old buddy Good King Wenceslas going out in that crisp, deep, even snow.

I would attempt to wish you a Merry Christmas in Czech if I could just figure out what all the diddlybobs around the letters meant. Caio will have to do! 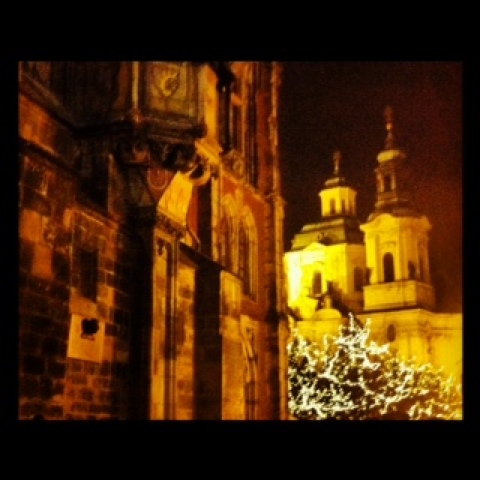 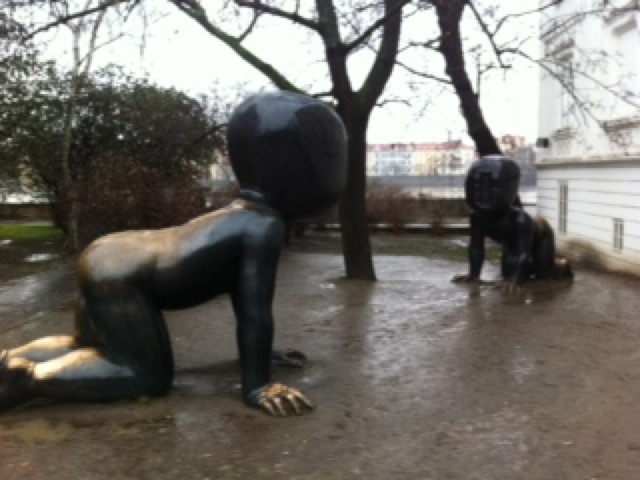 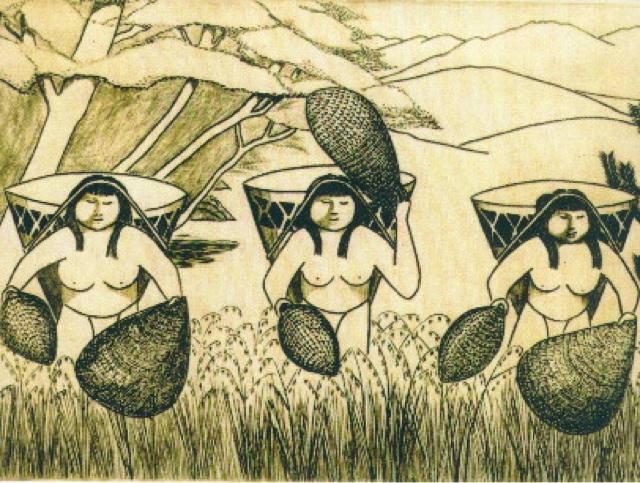 In our last episode we left the wasted, exhausted, pale, cold and near-dead Russian fur hunter Dimitri Pavlovich in the arms of his lithe and adventuresome teen princess of the Miwoks, who had a wonderful lyrical Native American name that meant "she who spreads her wings", which Pavlovich mistook for "she who spreads her legs" and interpreted his salvation as a sign to start a new race of peoples out in the dark grey Monterey pines, towering redwoods, coastal rushes and reefs where the magical dancing octopi pirouetted across the tidepools to the music of the north wind. And the babies like rabbits came streaming forth from the loins of Pavlovich's little leg spreader, as well as from all her sisters, cousins, aunts, mothers and grandmothers, as the former fur trader still lusted after pelts of all sizes and shapes. His harem produced dozens of short, swarthy little bruisers with the broad, flat faces of anvils, foreheads disappearing under thick black boar bristles and necks disappearing into upper torsos so dense and powerful that they had to step sideways through the doorways of their redwood bark teepees. Pavlovich, whom natives called "man with the forever erection" soon had the equivalent of an NFL football team to his name, 5 boys to every girl, and he was only 25. If he kept up this prodigious, furious pace the entire Pt. Reyes Peninsula would be crawling these pinebark-skinned monkeys with hair like the tree trunks every possible shade of madrone, bay, redwood, willow and ash, ropey and uncooperative as the tules at the head of the Bolinas Lagoon.

When Pavlovich turned 35 he looked around and realized that indeed he had brought forth upon the world a new race of beings, each of them in their raw, primitive, animal beauty as terrifying as a saber-toothed tiger or a rabid, half-starved hyena, ready to rip the throat out of any breathing creature that crossed it's path. It was not that these pre-Bolinians were born mean, rather it was when they eventually went to the water's edge on a quiet, still, morning, the fog blanketing the lagoon like a fisherman's sweater, and gazed upon their own smashed up monkey faces and looked into their own yellowy eyes peering back at them from the glassy waters that they became mad. Why were the other kids in the tribe so genuinely kind and friendly-looking, with wide stupid smiles, strong bright teeth and dimpled cheeks when they, the sons and daughters of the regal Russian, looked like vicious starving rats?

Eventually the pre-Bolineans began to resent the pleasantly plump, happy acorn-grinding fish-spearing Miwoks and began to withdraw from the tribe, slowly disappearing into the dense groves of seaside cypress and pine and into the coastal caves to live a lonely, feral existence, leaving their many different mothers and their one white-skinned father, "Man With Forever Erection", back in the village on the mesa above the sea. The village that, unbeknownst to Pavlovich and his harem of Miwok maidens, sat on a prime piece of real estate now owned not by the Russians as Pavlovich had hoped, but by the Alta Californians, once of Spain, late of Mexico and now naming every damn thing in sight.

One clear bright winter morning Pavlovich was awakened in his giant bed of coyote, otter, seal and bear blankets by a vaguely familiar sound, a sound he had not heard since his days at the Tsar's summer palace outside St. Petersberg, the sound of lowing cattle. "Beef on the hoof?" he mused insensitively, for one of toasty brown maidens in his bed was a bit of a heifer herself. She ran out, naked, and so did he, only to be confronted by what looked like a conquistadore on a jet black steed, El Gran Jefe de Rancho las Baulines, Gregorio Briones.

And thus began the infamous battle, the battle that has been stricken from the history books,the Pt. Reyes tourist pamphlets and the official record of the National Seashore and remains only in the deepest recesses of the battered Bolinian brain, The Battle of Bolinas.

(You won't want to miss Part III, will you?)

Posted by Unknown at 5:36 PM No comments:

The Excitement is Palpable! 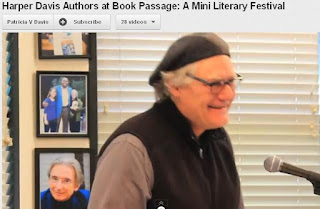 Here is a little tail, just a stub really like the kind you might find on the hind end of an Australian Shepard: Several weeks ago my publisher, Harper Davis, put on a literary event at Book Passage with our tribe (see www.harperdavis.com for all the juicy info on the books, the authors, etc.), and we all read segments from our respective titles. It was great fun, the crowd went wild, we sold books hand over fist and I was propositioned by several women in their seventies and a couple of Mexican janitors. So all in all a smashing success, except for one little thing: the audio recording of the event somehow escaped capture. The Harper Davis marketing team made a great little video without the voice over, which is kinda like watching a baseball game with no ball. You can watch it here: http://bit.ly/Vpf6iE


This of course does not mean all is lost. There is another thrilling, suspenseful and cinematically luscious video of the complete first chapter of Hack from an event at the Stinson Beach Chapel which you can watch here: http://bit.ly/QKx8uk. Bonnalicious "the beautiful" Hayes does and really embarrassing intro, and I proceed to stammer and spit my way through the always-entertaining Melanie Mills story and first chapter of Hack. This was followed by a rousing set of jazz and blues with Kevin Hayes on drums, Bonnie Hayes on keys and vocals, Greg Glazner on guitar and you know who, still stammering and spitting. 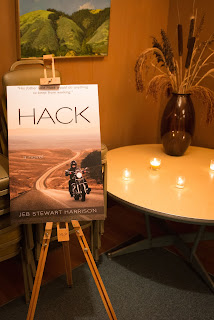 Finally, for those little Limbolanders that haven't thrown down on the book, I have included the portion of the first chapter that I read at the Book Passage event. So if you wanted to create a loop of my lips flapping in the breeze with the words below as sort of a ticker tape readout...you could! And if anybody actually does that I will give them a check for One Meeeeelion Dollars!

(Keep your dial tuned to this station Limbolanders. The Bolinians Part II is coming!) 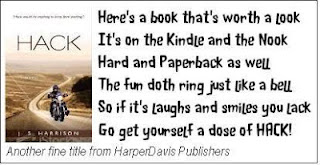 Posted by Unknown at 6:08 PM No comments: